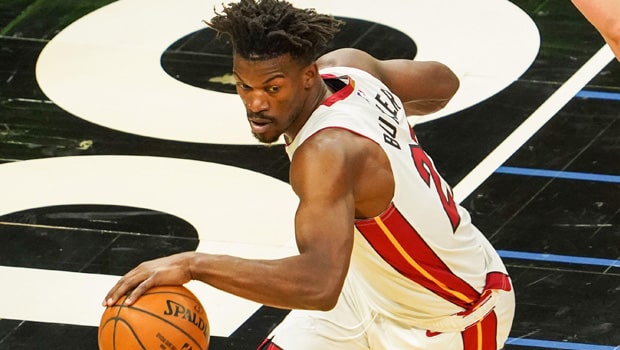 Miami Heat have strung together a good roster for this season after their last season’s heartbreak in the playoffs. They have done pretty well this season as they are second in the eastern conference with a 7-2 record. Jimmy Butler have led from the front as the Heat look like a team contending for the Championship just like Chicago Bulls, Brooklyn nets and Los Angeles Lakers.

Heat faced the Utah Jazz and the game was pretty close until Jimmy Butler’s men triumphed over the Jazz with a 118-115 win in their last match. Butler came up with an NFL analogy where he mentioned that he was like a wide receiver something he explained to the reporter at the post-game interview.

When the reporter compared Butler’s play style to a football esque wide receiver he came up with a hilarious response after the great win. The Heat talisman did not approve of that at first as he said, “Don’t do that. Wide Receiver.”

“If you throw it up there, it’s like a 109-108 percent chance that I’m gonna catch it. You know Kyle does a great job of putting me in that position. I’m comfortable doing that but I think, I’m a wide receiver at heart. Not a tight end, don’t do me, ” Butler went on adding.

Butler is currently third in the MVP ladder and rightly so. The Heat forward has been as influential off the court as he has been on the court. He is averaging 25 points per game and understands that this Heat team has the pieces required to make a deep playoffs run and who knows even win the NBA Championship. Butler has good support from players like Kyle Lowry, Bam Adebayo and Tyler Herro and if they continue this good work as a unit nothing can stop them from achieving success.

Heat will next face the Los Angeles Lakers on November 11 followed by their clash against the Clippers the very next day. A string of tough matches coming and it will only test the resolve of these players.