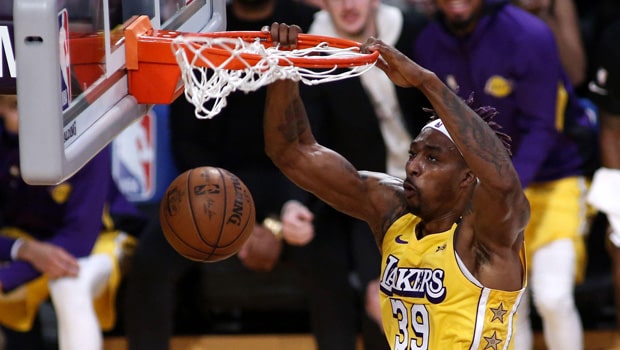 NBA always comes up with lists and creates hype during their anniversaries and this time it was no different the NBA 75 list celebrating the 75th anniversary of the league have raised a lot of controversies around players who have not made it to the list of the players. There is a shock exclusion of Brooklyn Nets star Kyrie Irving which raised major questions on the credibility of this all-time 75 greatest players’ list in the NBA.

Recently Los Angeles Lakers man Dwight Howard also shared his views on being snubbed from the 75 list. LeBron James, Russell Westbrook and Anthony Davis all three of them made it to the prestigious list but Dwight Howard missed and he was pretty casual about more like he knew that they would miss his name in the list.

Howard currently is more of a fringe player at the Lakers. His ability to run different positions allows more versatility to Lakers coach Frank Vogel. He mostly serves as a backup center for the Lakers this season. Despite his age and all other things, Howard is still a very capable defender on his own rights. But during his prime, he was surely one hell of a defensive beast.

While a lot of people spoke after Howard’s exclusion from the list the  35-year-old center seemed to have an idea that he would not get picked. Hence he was pretty casual about it. However, he does believe that he deserves to be on that list.

In a recent interview the question of the NBA 75 came up and Howard was quick to pounce with a reply that he knew that they would not keep him on that list. On further explanation, Howard explained that it was all politics.

Dwight said: “I knew I wasn’t going to be on it.” He further added, “Politics, I already knew. I knew soon as they made the 75 list I said yeah, they ain’t going to put me on the 75 list.”

But knowing the player and personality of Dwight Howard, he was a little upset and believes that he deserves to be on that list. He said, “I most definitely should be on that list. But it is okay. It is so okay. I am not upset about it, I was for probably like thirty seconds. I said you know what, life is great, I’m alive, I’m still playing basketball in my 18th season. Who cares about a list made by people who ain’t ever bounced a basketball before.”

Howard was once the most dangerous big man in the NBA during his prime and his growth was compared with Shaw. He came up with double-doubles for fun. He has three Defensive Player of the Year titles resonating the kind of player he was during his best days. Lastly, he has made 8-All Star appearances and four times in the All-Defensive first team.