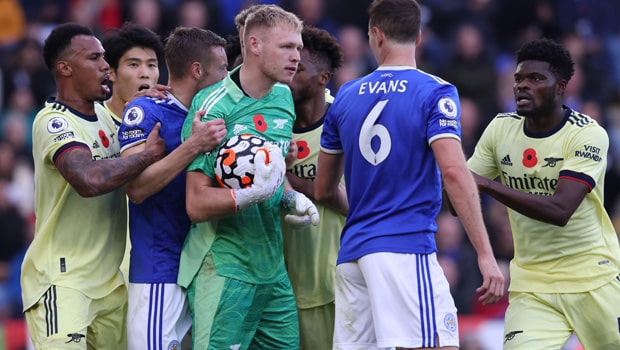 Aaron Ramsdale kept a clean sheet in one of the more dominating performances in his career as Arsenal took down Leicester City, 2-0, behind goals from Gabriel and Emile Smith Rowe.

The Gunners raced out to a 2-0 lead by the break — scoring both within 18 minutes of each other — but it was Ramsdale’s performance that took much of the attention.

“Just incredible,” Arenal’s Mike Arteta said after the match of Ramsdale. “We invest money in talent and people we believe can be great for the future of the club. Aaron has had some really encouraging performances and today he had some incredible saves to maintain the clean sheet & he needs to continue to do that.”

The win puts Arsenal up to the No. 5 spot of the Premier League table, now unbeaten in their last nine matches overall in any competition. They have won five of their last PL fixtures.

“It was one of them days it seemed like I was saving everything that was thrown at me and the lads were blocking everything. Top day in the end,” Ramsdale said.

Ramsdale made more saves (8) vs Leicester on Saturday than any other goalkeeper has in an away match in the Premier League this season.

Smith Rowe continued to build on his recent production as his goal on Saturday put him up to four goals and two assists in his last seven matches.

It was the second time this season that Rowe has both scored and scored in a Premier League match.

At just 20-year-old, Bukayo Saka made his 100th appearance for Arsenal on Saturday.

“It was an awful start to the game,” Leicester City manager Brendan Rodgers said. “We were so passive and lacked energy in our pressing. We made it far too easy. For me, it’s concentration. You have to be on it every single game.”

Leicester won the battle of possession 64-36, with 8 shots on goal vs five on goal for Arsenal.

For the first time since 1925, Arsenal have strung together three consecutive away wins against Leicester.

“We haven’t done anything, we won a couple of matches,” Arteta said. “We are not where we want to be still. We have a lot of things to improve. Let’s see humble, working hard and going game by game.”

Leicester City look to get back on track in their mid-week Europa League fixture (4 November) vs Spartak Moscow before their next Premier League match vs Leeds United (7 November).

Arsenal get about a week or so before their next match, 7 November vs Watford. A win next weekend would set up quite the marquee fixture the weekend after vs Liverpool (20 November).