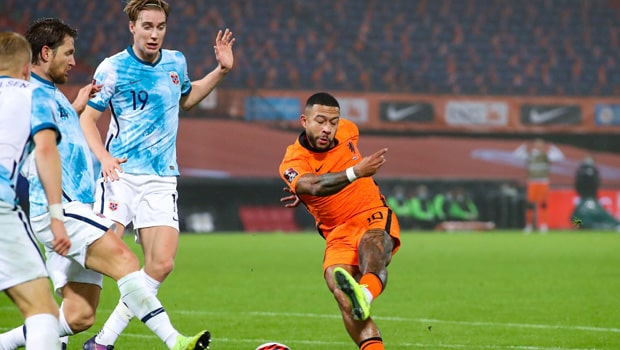 The Oranjes of Netherlands scored two late goals against Norway to book an automatic spot at the 2022 FIFA World Cup.

Netherlands needed to win to avoid a case of missing out totally should Norway beat them or a play off spot should they draw and Turkey win in Montenegro.

Turkey did win in Montenegro 2-1, but Netherlands left it quite late as Spurs midfielder Steven Bergwijn scored in the 84th minute while Memphis Depay scored in stoppage time to ensure the victory.

The result sees Netherlands end the group stage with 23 points from ten games while Turkey placed second with 21 points. It marks a return to the FIFA World Cup for the Netherlands who missed the last edition in Russia.

Meanwhile, Norway would have to wait for for their next FIFA World Cup appearance as their last appearance at the World Cup was at France 98 and have not played at a European championship since 2000.

In other groups Wales took the playoff spot as they held Belgium to 1-1 draw to deny Czech Republic of taking the slot into the next round of the qualification despite beating Estonia 2-0.

Meanwhile, after scoring four at the weekend in France’s 8-0 win over Kazakhstan, Kylian Mbappe scored a late goal after Karim Benzema had opened the scoring in the second half in a 2-0 victory over Finland.

The draws for the next round of playoffs for the FIFA World Cup in Europe will be done on the 26th of November where twelve teams will face each other for three spots to the 2022 World Cup in Qatar.