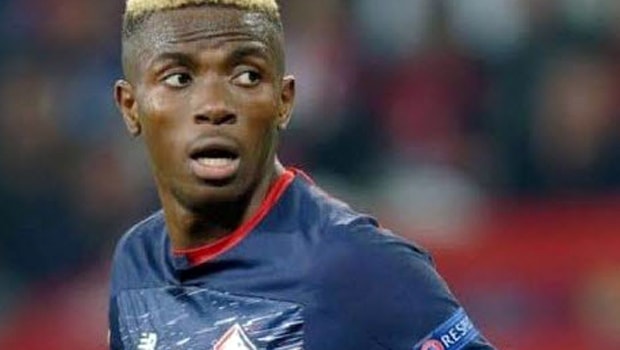 Osita Okolo, the agent of Lille striker, Victor Osimhen, has confirmed that the forward is ‘very impressed’ by what Napoli is offering him.

Osimhen, who has been in Naples since Wednesday, is on the verge of sealing a move to the Serie A side that recently won the Copa Italia trophy. The Nigerian international also met with Napoli manager,  Gennaro Gattuso, at the club’s base in Castel Volturno, with negotiation ongoing between both parties.

Okolo had earlier said the final decision lies with the former Charleroi striker on a €70m deal already in the pipeline. Osimhen could be joined in by his teammate Gabriel as reports say the Pertoniopei could end up paying €100m for the duo with the defender valued at €30m.

Okolo, who is also Osihmen’s brother-in-law, revealed that everything seems to be going well with a meeting scheduled with Napoli President Aurelio De Laurentiis today.

Speaking with Radio Punto Nuovo, the representative said after meeting with the club, Osimhen said he was impressed with Napoli after seeing people walking around the city streets despite just having a short tour.

He further said that the striker was impressed with the club’s project after meeting Gattuso, who briefed him about it.  With everything going in the right direction, all that is left, according to Okoro, is to decide if Osimhen wants to be part of the project or otherwise.

Other clubs looking for the service of Osimhen include Manchester United and Tottenham Hotspurs. With decision lying in the hands of Osihment as stated by his representative, the contract could be signed in a matter of days with Gabriel reportedly reaching an agreement with the top club earlier than his Nigerian counterpart.

Okoro further stated that Napoli fans would like Osihmen’s style of play, adding that it could positively impact his final decision.

Napoli will be glad to quickly sign the striker as his value could increase if he plays further games for the club. With the Ligue 1 already canceled, action will resume in July for the French Cup.