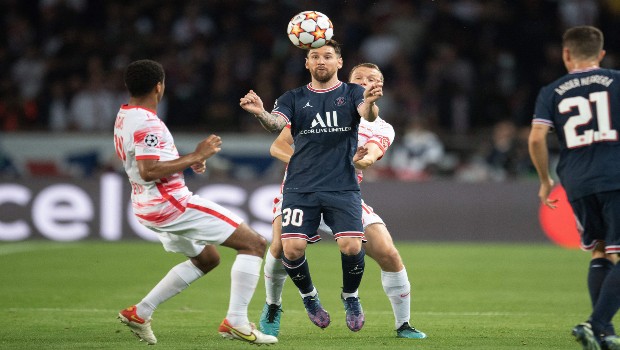 Paris Saint-Germain have continued their good run in this season’t UEFA Champions League as they comeback from behind to beat the rir German visitors RB Leipzig 3-2 at the Parc De Princes on Tuesday night.

All thanks to summer rsigning Lionel messi, who netted a brace agaonst the Bundesliga side. This now makes it goal himber three in the competiton for the six ties world footbaler pf the year.

Kylian Mbappe had put PSG ahead when he slammed the ball into the bottom corner on the counter-attack.
But the Germans replied through Andre Silva and Nordi Mukiele, who scored from Angelino crosses.

fter hios first shot was tipped onto the post, Messi tapped the rebound into an empty net to restore parity for the hosts before securing the maximum points with a Panenka penalty.

PSG would have scored four if Mbape had not missed his spot kick. After winning a penalty deep into injury time, Messi, who could have bagged a hat-trick left it for Mbappe, who skied it over the bar.
The win pusjes the French team above Manchester City after gathering seven points from three games.
PSG had opened theor camapign agaonst Club Brugge which held them to a draw before recording a 2-0 victory over English champions, Manchester City.

So far, Messi’s three goals for PSG has come from the tournament since joining this summer as a free agent.

The brace takes the tally of the Barcelona legend to 123 Champions League goals and RB Leipzig becomes the 37th team he has scored against in the competition.

The Argention is also the fourth player to score in their first two home Champions League matches for PSG. Neymar, Alex and George Weah and set previous record.

One can say Mauricio Pochettino’s side were only clinical as they were below their best with only four shots on target, including three from Messi.

Unfortunately, Leipzig have lost all their three Champions League games this season. and have only won four games in all competitions since Jesse Marsch took over in the summer.