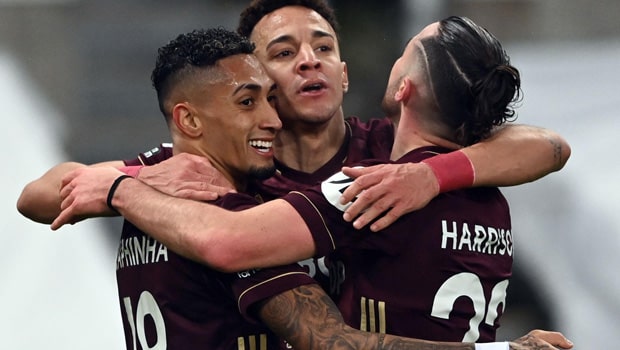 The second half saw three goals in a span of just four-to-five minutes as Marcelo Bielsa’s side got back to winning Sunday with Leeds getting three points off a win vs Norwich.

“The performance was a deserved victory,” said Bielsa. “The game was very disputed. It wasn’t an easy game to play for us. We had many situations where we could have created danger. But despite that, we didn’t manage to create that many [chances]. The ones that we did obtain, there wasn’t a great percentage that we could turn into a goal.”

Raphinha and Rodrigo get their fourth and second goals of the season, respectively.

Raphinha has been directly involved in 19 goals in the Premier League for Leeds (10 goals, nine assists). Since his first start in November 2020, Bruno Fernandes is the only non-striker (28) with more.

Norwich seemed to defend Raphinha and the overall Leeds attack well for the opening 15 minutes, but just weren’t able to keep the same level of discipline throughout.

Daniel Farke and Norwich are at the bottom of the standings, with no change in momentum in sight. Norwich had entered this match after a 7-0 thrashing to Chelsea.

“The job of a coach has some very difficult things you have to live with,” Bielsa noted, empathetically. “Especially with Norwich’s manager, he has shown a big spiritual fortitude and I hope he can come back from this situation.”

Leeds won the possession battle 52-48, but Norwich did have 5 corner chances to none for Leeds.

“I am disappointed,” Bielsa said. “In home games against sides around you in the table, you need to win points. We are not playing for warm words, we are playing for points and if you don’t achieve them in games like this it is difficult to achieve our targets and earn the right to stay in the league.”

When Derby recorded the worst season in Premier League history in 2007-08, they had six points after 10 games.

After 10 games, Norwich have two points. They have picked up 2 from a possible 60 available in their last 20 PL games overall.

“There’s no doubt about this disappointment,” Farke said. “We have lost against the top three and didn’t have many chances. In all the other games, we have been competitive and received compliments. There was good effort and a good team performance today, but we lacked quality in both boxes. We were the better side in the first half; when we equalized, the atmosphere was buzzing and we had the whole stadium on our side. Then they scored and it changed the mood again. In a tight game this is decisive. It’s crunch time period where we have to deliver,” Bielsa said.

Norwich hit the road vs Brentford next Saturday, while Leeds get set to host Leicester City on Sunday.