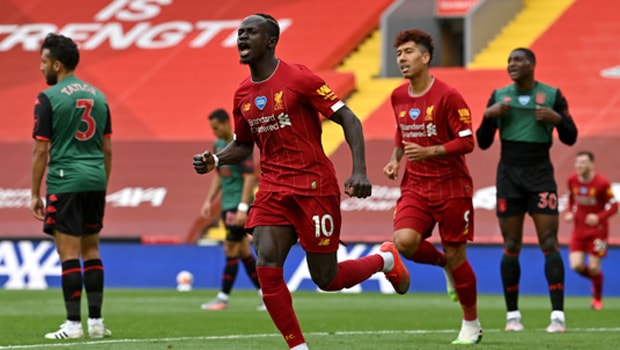 Liverpool’s first home game ended with a 2-0 win over a stubborn Aston Villa at the Anfield stadium.

Sadio Mane’s second-half strike and another added by Curtis Jones, who scored his first premier league goal, ensured that Jurgen Klopp’s side got their first win since becoming Champions.

Liverpool had lost scandalously 4-0 to Manchester City at the Etihad Stadium on Thursday, their first-ever game since becoming Champions.

After a goalless first half, Mane turned home a Naby Keita’s cross to give the Premier League champions the lead. Curtis Jones who just signed a new long term contract with a goal of his own.

The win is Liverpool’s 17th at the Anfield this season, and they are 11 points away from equalling Manchester City’s 100 points gathered last season with 5 more games still to go.

Aston Villa are winless since the restart of the league and are sitting in 18th position with 27 points, just one point away from 17th placed Watford.

In matches played in the Premier League at the weekend, Newcastle drew West Ham 2-2, Burnley and Sheffield United played out a 1-1 draw at the Turf Mor on Sunday.

Chelsea beat Watford 3-0 on Saturday while Arsenal were victorious against Wolves away from home at the Molineux Stadium.

Manchester United overcame Bournemouth 5-2 at the Old Trafford stadium with Bruno Fernandes scoring a free-kick and Marcus Rashford scoring a penalty and Mason Greenwood with a brace while Anthony Martial was on the scoresheet as well.

Brighton beat Norwich at the Carrow Road to make relegation survival bleak for the Canaries who sit rock bottom on the log with just 21 points.

Leicester City were 3-0 winners at home against Crystal Palace on Saturday also. Manchester City against Southampton at the Saint Mary’s Stadium stadium ended 1-0 on favor of the Saints.