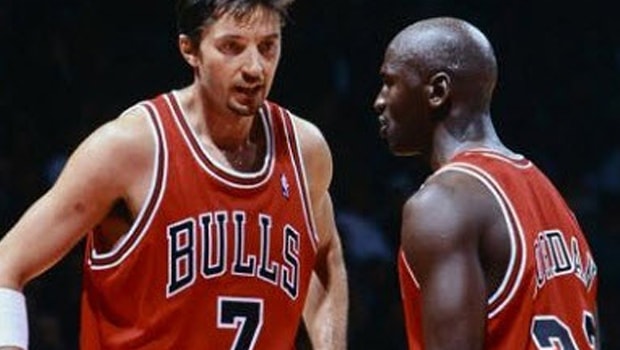 When Toni Kukoc finally came over to the NBA, he expected to join a Bulls team that was going to contend for championships. To his surprise, Michael Jordan announced his retirement to play baseball, just as he arrived.

This helped Kukoc’s playing time and he was able to find more minutes at small forward but as far as winning championships, things didn’t go so well for the Bulls and they were not able to defend their three-peat. They were still competitive without Jordan though.

Jordan being gone opened a window for other teams to reach the top and the Houston Rockets, led by Hakeem Olajuwon, took advantage of it. The Rockets would only have two years to make it happen and they did, beating the Knicks and Magic, respectively, to win back-to-back NBA Championships.

During the 2020 NBA All-Star weekend in Chicago, Toni Kukoc shared the secret of Michael Jordan’s return. Kukoc revealed that Michael Jordan never really left ahead of the 1993-94 season. Throughout his entire baseball adventure, MJ would practice with the Bulls once a month.

The Bulls players figured out that it must have meant that he wasn’t gone forever. However, there was no indication on when Jordan would return. In an interview for a local newspaper in his native Croatia, Kukoc explained:

“One day I came to the locker room and Michael had dozens of shoes at his locker. Everyone knew he didn’t bring so much gear for just one practice. We weren’t allowed to talk about it until he announced it himself. All he did was send a fax saying ‘I’m back.’ “

The next game was against the Pacers on the road. To manage the craziness that was about to happen, Michael Jordan didn’t travel with the team. Instead, he took a private jet to Indiana.

When MJ returned, there were just a few weeks left in the regular season and he had been away from the league for 21 months, his body was made for baseball and his conditioning wasn’t adequate.

The Bulls faced a young, talented Magic team in the second round of the playoffs and they lost the series in six games. Jordan made two costly turnovers in the final minutes of Game 1 and seeing him and the Bulls struggle to close a game was highly unusual, to say the least.

MJ dedicated the entire summer to prove that he was still the best player in the NBA and the rest is history. The Bulls went 72-10 the following year and got payback against the Magic, sweeping them in the Eastern Conference Finals before winning their fourth NBA Championship, beating the Seattle SuperSonics.

Kukoc then explained what it was like to be MJ’s teammate: “I’m happy to have witnessed what he did on the practice court, which was at times more spectacular than what he did in games. I don’t believe anyone was physically and mentally strong as he was.”